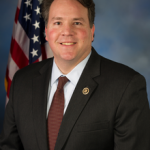 Alexander Xavier Mooney (born June 7, 1971) is an American politician who has been the U.S. Representative for West Virginia’s 2nd congressional district since 2015. He is a member of the Republican Party. He served in the Maryland State Senate, representing District 3, from 1999 to 2011 and is a former Chairman of the Maryland Republican Party. He is the first Hispanic elected to Congress from West Virginia.

Mooney’s mother, Lala, was a Cuban refugee who escaped from political imprisonment at the age of 21, shortly after the Bay of Pigs Invasion.[2] From a family of Irish immigrants, his father Vincent grew up in Long Island, New York. Mooney was born in 1971 in Washington D.C. He graduated from Frederick High School, where he was elected as president of the student government.[2]

In 1993, Mooney received his B.A. in philosophy from Dartmouth College. While attending Dartmouth, he ran for the New Hampshire House of Representatives in Grafton County‘s 10th District. He finished in last place with 8% of the vote.[3] In 2007, Mooney was elected to the Executive Committee of the Dartmouth College Association of Alumni.[4] In early 2008, Mooney traveled to New Hampshire to testify in support of a state bill that would require legislative approval for amendments that the privateBoard of Trustees of Dartmouth College wished to make to its charter.[5]

After college, Mooney served as staff assistant to U.S. Representative Roscoe G. Bartlett. In 1995 he became a legislative analyst for the Republican Conference of theU.S. House of Representatives.

Mooney represented Maryland’s District 3rd, which covers parts of Washington and Frederick Counties, in the Maryland Senate, from January 1999 to January 2011. While in office, he served as the executive director of the National Journalism Center from 2005 to 2012.

In 2000, Mooney received the Maryland Taxpayer of the Year award. In 2003 he received the National Hero of the Taxpayer Award. He also received the top business rating in the state from the organization Maryland Business for Responsive Government.