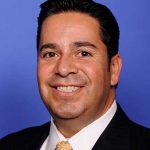 Ben Ray Luján (born June 7, 1972) is an American politician and the U.S. Representative for New Mexico’s 3rd congressional district, serving since 2009. He is a member of the Democratic Party. The district is based in Santa Fe, the state capital, and includes most of the northern portion of the state. Luján became the Chairman of the Democratic Congressional Campaign Committee on November 18, 2014.

Ben Ray Luján was born in Santa Fe, as the last child of Carmen and Ben Luján, and has two older sisters and an older brother. His father, Ben Luján, went into politics in 1970 when he was elected to the county commission. From 1974, he served as a longtime member of the New Mexico House of Representatives, serving as Majority Whip, and Speaker of the House.[1][dead link] His mother is a retired administrator with the Pojoaque Valley School System. His cousins include Michelle Lujan Grisham andManuel Lujan, Jr., a former Republican congressman and Secretary of the Interior. Manuel Lujan’s sister was his second grade teacher.[2]

After graduating from Pojoaque Valley High School, he worked as a blackjack dealer at both a Lake Tahoe and Northern New Mexico tribal casino.[3] After his stint being a dealer, he attended the University of New Mexico and later received a degree from New Mexico Highlands University.[4] Luján has held several public service positions. He was the Deputy State Treasurer and the Director of Administrative Services and Chief Financial Officer for the New Mexico Cultural Affairs Department prior to his election to the New Mexico Public Regulation Commission.

Luján was elected to the New Mexico Public Regulation Commission (PRC) in November 2004. He represented PRC district 3 which encompasses northeastern, north central and central New Mexico. His served as chairman of the PRC in 2005, 2006 and 2007. His term on the commission ended at the end of 2008.[4][dead link]

Luján helped to increase the Renewable Portfolio Standard in New Mexico that requires utilities to use 20 percent of their energy from renewable sources by 2020. Luján also required utilities to diversify their renewable use to include solar, wind and biomass.[4][dead link]