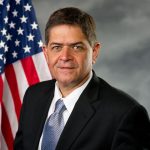 Filemon Bartolome Vela Jr. (born February 13, 1963)[1] is an American lawyer and politician who has been the U.S. Representative for Texas’s 34th congressional district since 2013. He is a member of the Democratic Party.

Filemon attended Saint Joseph Academy in Brownsville, Texas, and went on to graduate from Georgetown University in 1985. During his time at Georgetown, he served as an intern at the Federal Judicial Center – the research and education agency of the federal judicial system. He also served as an intern in Congressman Solomon P Ortiz’s Washington, D.C. office. Vela earned his J.D. from University of Texas at Austin School of Law in 1987.

For more than 20 years, Filemon practiced law in South Texas, as a plaintiff attorney. His legal practice focused on complex civil litigation. As a trial attorney, Filemon successfully represented clients who were the victims of racial discrimination, consumers who had been severely injured by defective products, and employees injured during work.

Some notable cases include Earl Shinhoster v. Ford Motor Company, in which Vela represented the family of deceased Director of the NAACP who was killed in a car rollover accident in what was the largest wrongful death settlements in Alabama history, and Robert Trevino v. Walmart, in which Vela represented a group of American farm workers who were told they could not shop in a Mississippi store.