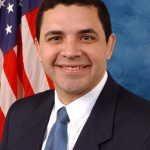 Henry Roberto Cuellar (born September 19, 1955) is the U.S Representative for Texas’s 28th congressional district, a position he has held since 2005. He is a member of the Democratic Party. The district extends from the Rio Grande to the suburbs of San Antonio.

Outside politics he has served as a professor at the Texas A&M International University in his native Laredo. The son of migrant workers who never made it past the fifth grade, Cuellar has positioned himself as a strong advocate for education and has often described himself as “the most degreed member of Congress,” having earned anassociates degree, a bachelor’s in Foreign Service, a master’s degree in International Trade, a law degree, and a Ph.D. in Government. Two schools in Laredo are named in his honor.

Cuellar was born in Laredo, the county seat of Webb County in South Texas, where he has resided most of his life. Cuellar’s parents, Martin S., Sr., and Odilia Cuellar, traveled as far north as Idaho each year performing migrant labor but decided to remain in Laredo when Martin found work as a gardener and ranch manager. With eight children, the family lived on Reynolds Street in the Las Lomas neighborhood of “The Heights” part of Laredo. None of the streets there were then paved. The parents knew no English but instilled the work ethic in their children.[2]

Henry is the oldest of the Cuellars’ children. His brother, Martin, Jr., is the sheriff of Webb County, having been first elected in 2008 over the incumbent fellow Democrat Rick Flores. A sister, Rosie Cuellar-Castillo, is the Laredo municipal judge, having won a nonpartisan runoff election held for that position on December 11, 2010.[3]

Cuellar attended Buenos Aires Elementary School, where he became an avid reader, and graduated in 1973 from J. W. Nixon High School, a classmate of future Webb County District Attorney Joe Rubio, Jr. He received an associate degree from Laredo Community College (then known as Laredo Junior College), where he would later teach courses in government on a part-time basis. He then attended the Edmund A. Walsh School of Foreign Service at Georgetown University in Washington, D.C., and graduated cum laude with a bachelor’s degree in foreign service. He also holds a master’s degree in International Trade from Texas A&M International University in Laredo and a Juris Doctor from the University of Texas School of Law and a Ph.D. from the University of Texas, both in Austin.

Cuellar opened his own law firm in Laredo in 1981 and became a licensed customs broker in 1983. He worked at his alma mater, TAMIU, as an adjunct professor for International Commercial Law from 1984 to 1986.

Prior to being elected to the United States House of Representatives, Cuellar was a member of the Texas House of Representatives from 1987 to 2001, having represented the major portion of Laredo. During his fourteen years as Laredo’s state representative, he served in leadership positions in the House Appropriations, Higher Education, and Calendar committees. His most notable accomplishments in the Texas State Legislature included coauthoring the State Children’s Health Insurance Program (SCHIP), which ensured health-care for thousands of previously uninsured children, and cosponsoring the largest tax cut in Texas history, which included a three-day tax holiday for consumers and small businesses. He also served on several national legislative committees dealing with state budgets, the U.S./Mexico border, and international trade.

In 2001, Cuellar was appointed as Secretary of State of Texas by Republican Governor Rick Perry. Though in office for only eight months, he worked to expand initiatives to register and educate voters and to protect voters’ rights. He expanded the Border/Mexico Affairs office.