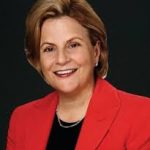 Ileana Ros-Lehtinen (born Ileana Ros y Adato; July 15, 1952) is the most senior U.S. Representative from Florida, representing Florida’s 27th congressional district. She served as Chairwoman of the House Foreign Affairs Committee from 2011–2013. In 1989, Ros-Lehtinen became the first Cuban American and Latina elected to Congress. She was also the first Republican woman elected to the House from Florida, and is currently the most senior Republican woman in the U.S. House.[1] Ros-Lehtinen gave the first Republican response to the State of the Union address in Spanish in 2011, and gave the third in 2014.[2]

In September 2011, Ros-Lehtinen became the first Republican member of the U.S. Congress to co-sponsor the Respect for Marriage Act, which would repeal theDefense of Marriage Act.[3] In July 2012, Ros-Lehtinen became the first Republican in the House to support same-sex marriage.[4] Also, she said she would propose legislation making U.S. funding for the UN contingent on extensive reform. Her bill will also call for the United States to withdraw from the UNHRC, as “Israel is the only country on the council’s permanent agenda, while abuses by rogue regimes like Cuba, China, and Syria are ignored.

Ileana Ros y Adato was born in Havana, Cuba, one of two children born to Enrique Ros, now a Cuban American businessman and anti-Fidel Castro activist, and his wife, Amanda Adato. The family emigrated to the United States when Ileana was seven years old. She received her Bachelor of Arts in education and her Master of Arts in educational leadership from Florida International University. She attended the University of Miami where she earned a Ph.D in higher education.[6]

Ros-Lehtinen was raised Catholic and is now an Episcopalian.[6][7] Ros-Lehtinen’s maternal grandparents were Sephardic Jews, originally from the Ottoman Empire, who had been active in Cuba’s Jewish community.[8] Her maternal grandfather left the city of Kırklareli for Cuba in 1913, fleeing the devastation and economic collapse caused by the First Balkan War.[9] Her mother later converted to Catholicism to marry her father.[8][10]

Ros-Lehtinen was an educator and the owner/operator of a private school in Miami-Dade County.[11] She was elected to the Florida House of Representatives in 1982, where she met State Representative Dexter Lehtinen (D-Miami). They married on June 9, 1984, after Dexter switched parties. They both served in the State House until 1986. That year, they were both elected to the Florida Senate, where he was elected to District 40 and she was elected in District 34.[12][13] In 1988, Dexter Lehtinen resigned his seat to become U.S. Attorney of South Florida. In 1989, Ros-Lehtinen resigned her seat to become a U.S. Representative.

COMING SOON: The issues and where this candidate stands as well as voting records.