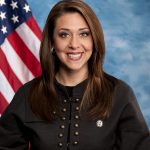 aime Lynn Herrera Beutler (/ˈbʌtlər/ but-lər;[1] born November 3, 1978) is an American politician, who has served as the U.S. Representative for Washington’s 3rd congressional district since January 2011. She is a member of the Republican Party, and is the second youngest female U.S. Representative. She is a former Senior Legislative Aide for U.S. Congresswoman Cathy McMorris Rodgers (R-Spokane) and a former state representative for the 18th Legislative District in Washington State.

Herrera Beutler was born in Glendale, California but moved to Washington at a young age. After receiving a BA from the University of Washington, Herrera Beutler became an aide for State Senator Joe Zarelli before becoming an aide for McMorris Rodgers. In 2007, she was appointed to fill a vacancy in the Washington State House where she served until being elected to Congress in 2010.

Jaime Lynn Herrera was born in Glendale, California, the daughter of Candice Marie (Rough) and Armando D. Herrera. Her father is of Mexican descent and her mother has English, Irish, Scottish, and German ancestry.[2][3] She was raised in southwestern Washington, and graduated from Prairie High School, where she played basketball. She earned a B.A. in Communications from the University of Washington.

Herrera Beutler moved back to the 18th Legislative District to run for state representative (map), and was appointed to the Washington House of Representatives in 2007 to replace former Rep. Richard Curtis, who resigned amid a sex scandal.[6] She went on to win the election to retain her seat in 2008 with 60% of the vote.

Herrera Beutler was elected as Assistant Floor Leader, the youngest member of her party’s leadership in the State House. Her first sponsored bill gave tax relief to business owners serving in the military. It was signed into law by Democratic Governor Christine Gregoire on March 27, 2008.[8]

During her time in the House, she also opposed Senate Bill 5967, which mandated equal treatment of the sexes in community athletic programs run by cities, school districts, and private leagues.