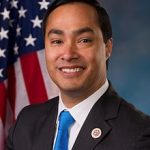 Joaquín Castro (born September 16, 1974)[1] is an American politician who has served since 2013 in the United States House of Representatives for Texas’s 20th congressional district. The district includes just over half of his native San Antonio, Texas, as well as some of its nearby suburbs. From 2003 to 2013, he was a representative in the Texas House of Representatives for District 125.[2] While in the Texas legislature Castro served as Vice-Chair of the Higher Education Committee and was a member of the Judiciary & Civil Jurisprudence Committee. He has previously served on the County Affairs Committee, Border & International Affairs Committee and the Juvenile Justice & Family Issues Committee.[2]

Julián Castro, his identical twin brother, served as Mayor of San Antonio from 2009 to 2014 and is now the 16th United States Secretary of Housing and Urban Development in the Cabinet of President Barack Obama

Castro was born and reared in San Antonio and attended Thomas Jefferson High School. Castro has stated that his interest in public service developed at a young age from watching his parents’ involvement in political campaigns and civic causes. His father, Jessie Guzman, was a retired mathematics teacher from the Edgewood Independent School District in the west side of San Antonio, and his mother, Marie “Rosie” Castro, a community activist. Jessie and Rosie never married. He graduated with honors from Stanford University with a Bachelor of Arts in political science and communications and earned a Juris Doctorate with his twin brother at Harvard Law School in Cambridge, Massachusetts.[4] After law school, the two brothers continued together to work for the law firm Akin Gump Strauss Hauer & Feld before starting their own firm in 2005.[5]