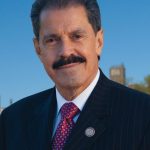 José Enrique Serrano (born October 24, 1943) is an American politician who has been a member of the United States House of Representatives since 1990. Serrano, aDemocrat from New York, represents a district that is one of the smallest in the country geographically, consisting of a few miles of the heavily urbanized and populatedSouth Bronx in New York City. His district is also one of the most densely populated and one of the few majority Hispanic districts in the country. The district was numbered the 18th from 1990 to 1993 and the 16th from 1993 to 2013; it has been the 15th district since 2013.

Serrano was born in Mayagüez, Puerto Rico. At the age of seven, Serrano was taken by his family to The Bronx, where he was raised in the Millbrook Houses. Serrano went to Grace Dodge Vocational High School in the Bronx and then attended Lehman College. He served in the United States Army medical corps from 1964 to 1966.

In 1990, Serrano won a special election for the seat vacated by resigning U.S. Congressman Robert García with 92% of the vote.[2] He has never won re-election with less than 92% of the vote,[3][4] in what is considered one of the safest seats in Congress.

In 2004, Congressman Serrano faced an electoral challenge from Jose Serrano, an unemployed former loading dockworker with the same name who eventually dropped out of the race in July.

Serrano has consistently supported initiatives to resolve Puerto Rico’s political status problem, including the 1998 Young bill, which he coauthored, and the December 22, 2005, report of the President’s Task Force on Puerto Rico’s Status, which recommends that Congress provide an opportunity for residents in Puerto Rico to vote for or against its current status, which the report describes as an unincorporated U.S. territory and Serrano describes as a U.S. colony. Serrano filed a bill, HR 900, with Puerto Rico Resident Commissioner Luis Fortuño, co-sponsored by 129 other Democratic and Republican members of Congress, to authorize such a referendum by 2009.[6]

A member of the Progressive Caucus, he is widely regarded as one of the most progressive members of Congress. He has been questioned about his pork barrel spending by some fiscal conservative members of Congress. Arizona Congressman Jeff Flake once said of Serrano’s $150,000 earmark to repair the roof at the city-owned Arthur Avenue Market (a historic indoor produce and prepared food market in the Bronx’s “Little Italy”), “I would argue this is one cannoli the taxpayer doesn’t want to take a bite of.”[7] Serrano replied to Flake, “The more you get up on these, sir, the more I realize that you do not know what you are talking about. I make no excuses about the fact that I earmark dollars to go in the poorest congressional district in the nation, which is situated in the richest city on earth.”[7]

On November 18, 2005, he was one of three votes in favor of immediate withdrawal of American troops from Iraq. The other two votes were from Cynthia McKinney of Georgia and Robert Wexler of Florida.[8]

Serrano has paid attention to local environmental issues in New York, with a particular focus on constructing greenways, acquiring parklands, and cleaning up the Bronx River, which runs through his district. Recently a beaver was discovered swimming in the river for the first time in 200 years, something seen as a testament to his efforts.[19] In 2007, he engineered the purchase of the last privately owned island in New York harbor—South Brother Island—for preservation in perpetuity by the City of New York as a wildlife refuge for rare shorebirds.

Serrano was a critic of the Bush administration’s approach to handling President Hugo Chávez of Venezuela. In 2005, while the Venezuelan President was in New York City speaking before the United Nations, the congressman invited him to his district to speak to his constituency.

Serrano is one of three New York-area congressmen on the House Appropriations Committee, the others being Nita Lowey of the 18th district and Steve Israel of 3rd district. He is currently the ranking member of the Appropriations Subcommittee on Financial Services, having previously served as the chair. As chairman, he successfully engineered the inclusion of language in the 2007 omnibus spending bill that guarantees the extension of the 50 State Quarters program to include the minting of 6 additional quarters to honor the District of Columbia and the 5 United States territories, including Serrano’s native Puerto Rico.

Serrano has also been an advocate for Puerto Ricans under FBI prosecution. In May 2000, he brokered an agreement with then-FBI Director Louis Freeh, then Puerto Rican Independence Party senator Manuel Rodríguez Orellana and then Puerto Rico Senate Federal Affairs Committee chairman Kenneth McClintock, the islands’ outgoing Senate President, that has resulted in the release of nearly 100,000 pages of previously secret FBI files on Puerto Rican political activists.

In the aftermath of the death of Hugo Chávez, Congressman Serrano wrote condolences to Chavez via Twitter describing him as a leader who “understood the needs of the poor. He was committed to empowering the powerless. R.I.P. Mr. President.”[20] However, the comments proved controversial with some twitterers[21] and political commentators[22] and prompted a response from the Republican National Committee that described Serrano’s tweet as “simply insulting that a Democrat Congressman would praise the authoritarian ruler Hugo Chávez.