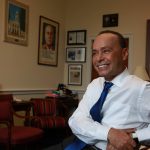 Luis Vicente Gutiérrez (born December 10, 1953) is an American politician and the U.S. Representative for Illinois’s 4th congressional district, serving since 1993. From 1986 until his election to Congress, he served as a member of the Chicago City Council representing the 26th ward. He is a member of the Democratic Party and theCongressional Progressive Caucus. He is recognized as the “national leader on comprehensive immigration reform.”[1] In the 113th Congress, with his 20 years of service, Gutiérrez became the longest serving member of the Illinois House delegation, and so is occasionally referred to as the unofficial “dean” of the delegation.[2][3]

Of Puerto Rican descent, he is a supporter of Puerto Rican independence, and the Vieques movement.[4] Gutiérrez is also an outspoken advocate of workers’ rights,LGBT rights, gender equality, and other liberal and progressive causes.[5][6] Gutiérrez has been compared to civil rights leader Martin Luther King, Jr., due to both figures’ use of non-violent civil disobedience in their advocacy for the equal rights of their communities.[7] In 2010 Frank Sharry of America’s Voice, an immigration reform advocacy group, said of Gutiérrez: “He’s as close as the Latino community has to a Martin Luther King figure.”[8] His supporters have given him the nickname El Gallito – the little fighting rooster – in reference to his fiery oratory and political prowess.

Gutiérrez was born and raised in the Lincoln Park neighborhood of Chicago, then an immigrant and working-class community. His mother was an assembly-line worker and his father was a cab driver. After his freshman year at St. Michael’s High School, his parents moved the family to their hometown of San Sebastián, Puerto Rico. Gutiérrez, who had never before visited the island, reluctantly followed his parents; there he learned to speak Spanish. Gutiérrez said of his experience moving from Chicago to Puerto Rico: “In Lincoln Park, I had been called a spic, then all of a sudden I land on the island and everyone calls me gringoand Americanito. I learned to speak Spanish well.”[9]

In 1974, Gutiérrez returned to Chicago and enrolled at Northeastern Illinois University. He got involved in student activism and social justice issues, writing for the student publication Que Ondee Sola and serving as the president of the Union for Puerto Rican Students.[10] In 1976, while a senior at Northeastern, he began driving a cab in order to raise enough funds to visit his longtime girlfriend, Soraida, in Puerto Rico. In 1977, after graduating from Northeastern Illinois University with a degree in English, he returned to Puerto Rico and married Soraida. The couple returned to Chicago in 1978 and, unable to find other work, Gutiérrez took up taxi driving full-time.[11] Gutiérrez eventually found work as a Chicago Public School teacher and later a child abuse caseworker with the Illinois Department of Children & Family Services.

In 1983, Gutiérrez left his job with the Illinois Department of Children and Family Services to run against incumbent Dan Rostenkowski for 32nd ward Democratic committeeman in the March 1984 primary election. To fund his campaign, Gutiérrez returned to driving a cab seven days a week, 14 hours a day. Gutiérrez’s work as a taxi driver grew his campaign fund to $6,000, against which Rostenkowski had hundreds of thousands of dollars. Reporting on Gutiérrez’s early political career, Jorge Casuso and Ben Joravsky of the Chicago Tribune wrote: “Gutiérrez thought he could win. Washington’s 1983 victory – the first local race Gutiérrez had voted in – had left him wildly optimistic. Before that, he didn’t think blacks, Hispanics and poor people could win a legitimate voice in local government.”[9]

Relying on his family and friends as campaign staff, Gutiérrez opened up his campaign office on North California Ave in Chicago’s Humboldt Park neighborhood. Gutiérrez collected over three-fourths of the 2,200 signatures he needed to quality for the ballot on his own. Rostenkowski, then a twelve-term Congressman and Chair of the powerful House Ways & Means Committee soundly defeated Gutiérrez, with 76% of the vote.

Following Gutiérrez’s loss to Dan Rostenkowski, he helped found the Cook County Coalition for New Politics in spring of 1984. The coalition was meant to be a grassroots, independent, and multiracial counterweight to the Cook County Democratic Party.[13]

Gutiérrez’s political activism and role as a rising leader in Chicago’s burgeoning Latino community caught the attention of Chicago’s first African-American Mayor – Harold Washington – who appointed him in August 1984 to the position of deputy superintendent in the Department of Streets and Sanitation.[9]

Gutiérrez served as a deputy superintendent in the Washington administration and as an administrative assistant to the Mayor – serving on the Mayor’s committee on infrastructure.[14]

In October 1984, a Molotov cocktail came crashing through the front living room window of Gutiérrez’s home. For a period of three months following the firebombing, his family lived in hotel rooms. The offenders were never identified, but Gutiérrez attributed the attack to “culprits from the right… opposed to reform and Mayor Washington.”[9]

In July 1985, in an effort to support Washington’s political reform movement, Gutiérrez founded the West Town-26th Ward Independent Political Organization (IPO). Like the Cook County Coalition for New Politics, the organization aimed to bring together residents of all races in support of progressive reform in Chicago. The Mayor attended the organization’s kick-off event, at which 100 names were added to the mailing list and $5,000 was raised.

In December 1985, as a result of a November 1985 ward remap, district court judge Charles Norgle ordered a special election for March 18, 1986, in seven wards, including the 26th.[14] The incumbent alderman of the 26th ward, Michael Nardulli, an Italian-American, chose not to seek re-election in the newly drawn majority Latino district. Gutiérrez declared his candidacy for alderman of the 26th ward and soon received the endorsement of Mayor Harold Washington. At the time of the election, opponents to Washington’s administration, led by Ed Vrdolyak of the 10th ward, controlled the City Council. This divide within city government was dubbed by the Chicago media as Council Wars. The 1986 special elections gave Washington the opportunity to take control of the city council. Because the six other special elections were all but decided, control of the council came down to the race in the 26th ward. Manuel Torres, then a member of the Democratic machine and Cook County Commissioner, also entered the race for 26th ward Alderman. Torres was endorsed by Vrdolyak, former mayor Jane Byrne, future mayor and then State’s Attorney Richard M. Daley, and machine Alderman Ed Burke and Dick Mell.[14]

Gutiérrez’s campaign volunteers were primarily women,”ex-hippies and… community activists-black, white and Hispanic.”[9] With the campaign theme: “Church, Family, Community,” support from Mayor Harold Washington – who donated $12,000 to Gutiérrez – and the now 250 members of the West Town-26th Ward Independent Political Organization as volunteers, Gutiérrez bested Torres by 22 votes, a margin not large enough to avoid a run-off against Torres.[13][15]

On the eve of the Gutiérrez-Torres run-off, Spanish language television aired the candidates’ final debate. Gutiérrez, who spoke Spanish during the debate, outperformed Torres, who chose to speak entirely in English. Gutiérrez’s use of Spanish and his grassroots organizing are credited for his 53%–47% victory over Torres. Gutiérrez is reported to have said during the election: “My supporters could give a damn about the Democratic Party. They’re ready to work on whatever it is that moves socioeconomic justice ahead.

As a member of the city council, Gutiérrez was a key backer of the 1986 gay rights ordinance – which sought to ban discrimination based upon gender & sexual orientation. He was also a proponent of local economic development and construction of affordable housing. He was referred to as a “workhorse in the city council” by political author Marable Manning.[14]

In the 1987 municipal elections, Gutiérrez faced five opponents and was re-elected to the City Council with 66% of the vote.[14] Following Washington’s death and the battle over who would succeed the deceased Mayor, Gutiérrez voted for African-American Alderman Timothy C. Evans over machine-backed Alderman Eugene Sawyer. In the 1989 Mayoral election, Gutiérrez endorsed State’s Attorney Richard M. Daley for Mayor, stating: “I will have a great influence in determining the thrust and tone of the Daley administration`s progressive and liberal agendas.”[16]

Under Daley’s administration, Gutiérrez served as Chair of the Committee on Housing, Land Acquisition, Disposition and Leases and Council President pro tempore, presiding over meetings in the Mayor’s absence.