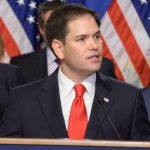 Marco Antonio Rubio (born May 28, 1971) is an American politician and attorney, and the junior United States Senator from Florida. Rubio previously served as Speaker of the Florida House of Representatives.

Rubio is a Cuban American from Miami, with degrees from the University of Florida and the University of Miami School of Law. In the late 1990s, he served as a City Commissioner for West Miami and was elected to the Florida House of Representatives in 2000, representing the 111th House district.

Later in 2000, Rubio was promoted to be one of two majority whips, and in 2002, he was appointed House Majority Leader by Speaker Johnnie Byrd. Subsequently, he was elected Speaker of the Florida House, serving as Speaker for two years beginning in November 2006. Upon leaving the Florida legislature in 2008 due to term limits, Rubio started a new law firm, and also began teaching at Florida International University, where he continues as an adjunct professor.

Rubio successfully ran for United States Senate in 2010. In the U.S. Senate, he chairs the Commerce Subcommittee on Oceans, Atmosphere, Fisheries, and Coast Guard, as well as the Foreign Relations Subcommittee on Western Hemisphere, Transnational Crime, Civilian Security, Democracy, Human Rights and Global Women’s Issues. He is one of three Latino Americans serving in the Senate.

Marco Antonio Rubio was born in Miami, Florida,[4] the second son and third child of Mario Rubio Reina[5] and Oriales (née Garcia) Rubio. His parents were Cubans who immigrated to the United States in 1956, prior to the rise of Fidel Castro in January 1959.[6] His mother made at least four trips back after Castro’s victory, including for a month in 1961.[6] Neither of his parents was a U.S. citizen at the time of Rubio’s birth,[7] but his parents applied for U.S. citizenship and were naturalized in 1975.[6]

Rubio’s maternal grandfather, Pedro Victor Garcia, initially immigrated legally to the U.S. in 1956, but returned to Cuba to find work in 1959.[8] When he returned to the U.S. in 1962 without a visa, he was detained as an undocumented immigrant, and an immigration judge ordered him deported.[8][9] The immigration officials had a “change of heart” later the same day, the deportation order was not enforced, and Garcia was given a legal status (“parolee”) that allowed him to stay in the U.S.[10] Rubio’s grandfather remained in the US and re-applied for permanent resident status in 1966, following passage of the Cuban Adjustment Act, at which point his residency was approved. In March 2016, the New York Times reported that Garcia was put in a “gray area” of the law that meant he could remain in the U.S. from 1962 to 1966.[11][12][10]

Marco has three siblings: older brother Mario, older sister Barbara (married to Orlando Cicilia), and younger sister Veronica (formerly married to Carlos Ponce).[13] Growing up, his family was Roman Catholic, though from age 8 to age 11 he and his family attended The Church of Jesus Christ of Latter-day Saints while living in Las Vegas.[14] During those years in Nevada, his father worked as a bartender at Sam’s Town Hotel and his mother a housekeeper at the Imperial Palace Hotel and Casino.[15] He received his first communion as a Catholic in 1984, before moving back to Miami with his family a year later. He was confirmed and later married in the Catholic Church.[16][17]

While studying law, Rubio interned for U.S. Representative Ileana Ros-Lehtinen.[21] He also worked on Republican Senator Bob Dole‘s 1996 presidential campaign.[22][23] In April 1998, two years out of law school and 26 years old, Rubio was elected to a seat as City Commissioner for West Miami before moving on to the Florida House of Representatives in early 2000.[24][25]

In October 2011, newspapers reported that Rubio’s previous statements that his parents were forced to leave Cuba in 1959, after Fidel Castro came to power, were embellishments. His parents actually left Cuba in 1956, during the dictatorship of Fulgencio Batista. According to The Washington Post, many voters in Florida would be less impressed by his family being economic migrants instead of political refugees from a communist regime.[6] Rubio responded, saying: “The essence of my family story is why they came to America in the first place, and why they had to stay.”[26] Aside from Rubio’s maternal grandfather who fled communist Cuba in 1962, several other relatives were also admitted to the U.S. as refugees.