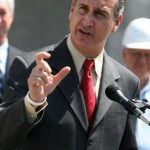 Mario Rafael Díaz-Balart Caballero (born September 25, 1961) is a Republican U.S. Representative from Florida. He has represented a district in the Miami area since 2003, currently numbered as the 25th district. His current district includes much of southwestern Miami-Dade County, including the city of Hialeah, as well as much of the northern portion of the Everglades.

He attended the University of South Florida to study political science before beginning his public service career as an aide to then-Miami Mayor Xavier Suárez in 1985. In the same year, he changed his political party affiliation from Democratic to Republican.