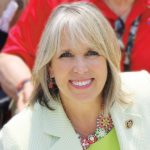 Michelle Lujan Grisham (born October 24, 1959) is an American lawyer and politician who is the U.S. Representative forNew Mexico’s 1st congressional district, serving since 2013. She has served in the New Mexico state cabinet, and asBernalillo County Commissioner.

Michelle Lujan was born in Los Alamos, New Mexico, and grew up in Santa Fe. Her father, Buddy Lujan, practiced dentistryinto his 80s until he died in March 2011. Her mother, Sonja, was a homemaker. Michelle’s sister Kimberly was diagnosed with a brain tumor at the age of two. Her care quickly exhausted her lifetime caps on the family health insurance. She died at the age of 21. Her parents spent decades after Kimberly’s death paying off the debt. This family experience made the importance of health care reform critical to Michelle.[1]

Lujan Grisham served as director of New Mexico’s Agency on Aging under Governors Bruce King, Gary Johnson, and Bill Richardson, who elevated the position to the state cabinet. In 2004, Richardson named Lujan Grisham as the secretary of the Department of Health.[3]

Lujan Grisham was elected to the Bernalillo County Commission, serving from 2010 through 2012.

She resigned as Secretary of Health in order to run for the United States House of Representatives in the 2008 elections, losing in the Democratic primary to Martin Heinrich. He won the Democratic primary on June 3, 2008 with 44% of the vote. New Mexico Secretary of State Rebecca Vigil-Giron ranked second with 25% and Michelle Lujan-Grisham ranked third with 24% of the vote.

Lujan Grisham sought the Democratic nomination for the House in 2012, with Martin Heinrich leaving to run for the United States Senate. She won the nomination, defeating Marty Chavez and Eric Griego.[7] She faced Janice Arnold-Jones, a former member of the New Mexico House of Representatives, in the November general election.[8] Lujan Grisham defeated Arnold-Jones,[9] 59%–41%.