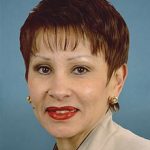 Nydia Margarita Velázquez (born March 28, 1953) is a Puerto Rican politician who has served in the United States House of Representatives since 1993. Velázquez, aDemocrat from New York, is the first Puerto Rican woman to be elected to Congress, and she was the chair of the Congressional Hispanic Caucus until January 3, 2011. Her district, located in New York City, was numbered the 12th district from 1993 to 2013 and has been numbered the 7th district since 2013.

Velázquez was born in Yabucoa, Puerto Rico on March 28, 1953.[1] She grew up in Yabucoa[2] in a small house on the Río Limón,[3] one of nine children.[4] Her father Don Benito Velazquez was a poor worker in the sugarcane fields who became a self-taught political activist and the founder of a local political party.[3] Political conversations at the dinner table focused on workers’ rights.[3] Her mother was Dona Carmen Luisa Serrano.[3]

Velázquez returned to New York City and taught at Hunter College from 1981 until 1983 as an adjunct professor of Puerto Rican studies.

In 1984, Velázquez was named by Howard Golden (then the Brooklyn Borough President and chairman of the Brooklyn Democratic organization)[5] to fill a vacant seat on the New York City Council, becoming the first Hispanic woman to serve on the Council.[1][3] Velázquez ran for election to the council in 1986, but lost to a challenger.[3]

From May 1986 to July 1989, Velázquez was national director of the Puerto Rico Department of Labor and Human Resources’ Migration Division Office.[1] From 1989 to 1992 she was named by the governor of Puerto Rico as the director of the Department of Puerto Rican Community Affairs in the United States.[1][3] In this role, according to a 1992 New York Times profile, “Velazquez solidified her reputation that night as a street-smart and politically savvy woman who understood the value of solidarity and loyalty to other politicians, community leaders and organized labor.”[4]

Velázquez ran for Congress in the 1992 election, seeking a seat in the New York’s newly-drawn 12th congressional district, which was drawn as a majority-Hispanic district.[4] Velázquez won the Democratic primary, defeating nine-term incumbent Stephen J. Solarz and four Hispanic candidates.

In 2003, Hispanic Business Magazine honored her with its first “Woman of the Year” award, citing her support of minority small-business owners. As a Representative, Velázquez has focused on building a legislative agenda that lobbies to increase the opportunities for the nation’s 47 million Hispanics, including the over 2.3 million Hispanics currently residing in New York City.[7]

Throughout her career as a New York Representative, Velázquez has consistently and fully supported pro-choice and family-planning interests groups such as the NARAL Pro-Choice America and the Planned Parenthood. Velázquez has consistently shown support of the National Farmers’ Union. She has shown no support of interests groups that are against animal rights and animal rightists.[8]

In 2009, Velázquez voted against the amendment Prohibiting Federally Funded Abortion Services. In the past year, Velázquez has supported the Agriculture, Rural Development, Food and Drug Administration, and Related Agencies Appropriations, the Unemployment Benefits Association, and the Unemployment Benefits Extension. Velázquez has also consistently voted in favor of bills attempting to strengthen women’s rights, such as the Employment Discrimination Law Amendments, Equal Pay Bill and the Inclusion of Consolidated Appropriations.[8]

On September 29, 2008, Velázquez voted in favor of the Emergency Economic Stabilization Act of 2008. On November 19, 2008, Congresswoman Velázquez was elected by her peers in the Congressional Hispanic Caucus (CHC) to lead the group for the 111th Congress.[1]

Prior to removing her name from consideration, she was considered a possible candidate to be appointed to the United States Senate by Governor David Paterson after New York Senator Hillary Clinton was nominated to be a member of President Barack Obama‘s cabinet.[9]