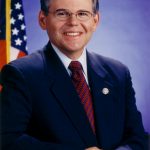 Bob grew up the son of Cuban immigrants – a seamstress and a carpenter – in a tenement building in Union City, New Jersey. Bob Menendez was the first in his family to go to college.

He and his family overcame the challenges of making it into the middle class, an experience that shaped his values and serves as the motivation behind his tireless work to remove the obstacles that are keeping Americans from achieving their dreams.

At an early age, Bob learned the importance of standing up for what’s right. No matter how powerful the opposition.

He entered public service as a 19-year old college student – when Bob launched a successful petition drive to reform his local school board. That same commitment led him to take on his hometown’s powerful mayor when Bob saw him abusing the office for personal gain.

Bob stood up to the corrupt political establishment and led a coalition of reformers who cleaned up the city. He took on the mayor and testified against him in court – even though it meant wearing a bulletproof vest after receiving threats to his life.

Bob Menendez was elected Mayor of his hometown, and went on to serve as a state legislator and in the United States House of Representatives.

Today, in the United States Senate, Bob Menendez stands up for New Jersey and stands up to those who try to bend the rules and take advantage of hard working families.

At a time when the American Dream seems threatened, Bob Menendez’s life is a reminder of the promise and potential our nation holds out to those who work hard and give something back.

Bob Menendez knows where he comes from. So in these tough times, New Jersey’s middle class knows they can count on him to help restore the American Dream for them.