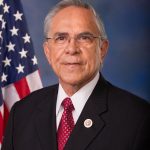 Rubén Eloy Hinojosa (born August 20, 1940) is the retiring U.S. Representative for Texas’s 15th congressional district, serving since 1997. He is a member of theDemocratic Party. The district stretches from Seguin (east of San Antonio), to McAllen on the Mexican border. Much of the region is rural although Hidalgo County is part of the third fastest-growing metropolitan statistical area in the country. Hinojosa serves on the House Financial Services and Education committees.

Hinojosa was born in Edcouch, Texas. The eighth of eleven children, Hinojosa was reared in Hidalgo County, which borders on Mexico, and earned two business degrees,[1]a Bachelor of Business Administration from the University of Texas at Austin and his MBA from the University of Texas-Pan American. For two decades, he was the president and chief financial officer of his family’s food processing company, H&H Foods. U.S. President Ronald W. Reagan named H&H the “Number One Minority-Owned Business in America” in 1983. In 1987, the U.S. Small Business Administration named the Hinojosas “Minority Entrepreneur of the Year.”[2]

In 1974, Hinojosa was elected to the Texas State Board of Education, a position which he held for ten years.

Hinojosa’s father and uncle founded H&H Foods in 1947 as a slaughterhouse. Control of the firm passed in 1976 to himself and his brother, Liborio. He gave up his executive position when he entered Congress, but remained a director and major stockholder.

Hinojosa did not seek an eleventh term in the House in 2016. Democrats Vicente Gonzalez and Juan “Sonny” Palacios, Jr., meet in the May 24 runoff election to select a nominee to succeed Hinojosa. Gonzalez led in the March 1 primary with 22,122 votes (42.2 percent); Palacios trailed with 9,907 votes (18.9 percent). The remaining 28.9 percent of the vote was shared by four other candidates. [8]

Three Republicans contested the seat in the primary election. Tim Westley (born c. 1972), an African-American conservative pastor of Shepherd’s Vineyard Christian Church in San Antonio, who carries the backing of the Tea Party movement, led the field with 13,153 votes (45.3 percent). He faces a runoff on May 24 with Ruben O. Villarreal, who received 9,131 votes (31.5 percent); the third-placed candidate, Xavier Salinas, drew a critical 6,730 votes (23.2 percent).[9] Villarreal is the mayor of Rio Grande City, a non-partisan position, in heavily Democratic Starr County.[10]

One Green, Vanessa S. Tijerina (born c. 1978), a female Latina Progressive, nurse and biologist. Tijerina is an underdog in this election, hoping for a black horse win.

During the 111th Congress, Hinojosa voted with his party 99 percent of the time. He voted to extend the Patriot Act and supported the 2011 budget compromise. He voted for the Patient Protection and Affordable Care Act (Obamacare), the American Clean Energy and Security Act, otherwise known as, “Cap and Trade”,[14] and the Troubled Asset Relief Program.[13]

Hinojosa has emphasized assisting minorities and low-income Americans gain access to higher education. He has been especially active in supporting water-conservation projects along the Mexican border, and in replacing federal subsidies for student loans with direct government loans. Hinojosa and George Miller were responsible for constructing the 2008 Higher Education Opportunity Act, which increased the maximum Pell Grants available to low-income students and authorized additional funding for minority-serving schools.

He co-sponsored a 2010 bill for enhanced border security, but has opposed the construction of a wall along the border.

He has also been a very strong supporter of free-trade agreements, and was one of 15 House Democrats to vote for the 2005 Central American Free Trade Agreement.[1]

In 2010, Hinojosa supported the introduction of full-body scanners at Valley International Airport. He said that we need to take more precautions when it comes to public safety, and that the new technology “gives TSA employees a distinct advantage in the prevention of terrorist events.”[15]

In June 2011, Hinojosa introduced legislation that would expand the authority of NADBank, which had already funded more than 100 projects to prevent the release of untreated sewage into the Rio Grande and other bodies of water, to finance infrastructure projects designed to enhance economic development along the border and raise environmental standards.[16]

He has also supported measures to aid undocumented workers. He backed the “AgJobs” bill aimed at helping undocumented farm workers. He has been an advocate of the DREAM Act, which would provide citizenship to people who were brought to the U.S. as children by their parents.[1][17] He cited his concern that these children came to the US alongside their parents and should not be faulted. Hinojosa argued that “[o]ur country is much better off by being able to let those children get a college education and serve in the military and contribute to the prosperity of our country.”[18]

J. M. Lozano, Republican member of the Texas House of Representatives from Kingsville in Kleberg County, for a time worked on Hinojosa’s staff in McAllen beginning in 2003. At the time Lozano was a Democrat.[19]