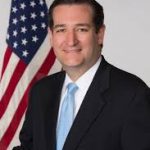 Rafael Edward “Ted” Cruz (born December 22, 1970) is an American politician and attorney, who has served as the junior United States Senator from Texas since 2013.[1] He was a candidate for the Republican nomination for President of the United States in the 2016 election.

Cruz graduated from Princeton University, New Jersey, in 1992, and from Harvard Law School, Massachusetts, in 1995. From 1999 to 2003, he served in various political appointee positions: the Director of the Office of Policy Planning at the Federal Trade Commission (FTC), an Associate Deputy Attorney General at the United States Department of Justice, and a Domestic Policy Advisor to George W. Bush on the 2000 George W. Bush Presidential campaign.

Cruz served as Solicitor General of Texas, from 2003 to 2008, appointed by Texas Attorney General, Greg Abbott. He was the first Hispanic, and the longest-serving, Solicitor General in Texas history. From 2004 to 2009, Cruz was an Adjunct Professor at the University of Texas School of Law in Austin, Texas, where he taught U.S. Supreme Court litigation.

Cruz ran for the Senate seat vacated by fellow Republican Kay Bailey Hutchison and, in July 2012, defeated Lieutenant Governor David Dewhurst during the Republicanprimary runoff, 57%–43%. He defeated former State Representative Paul Sadler in the November 2012 general election, winning 56%–41%. He is the first Hispanic American to serve as a U.S. Senator representing Texas, and is one of three senators of Cuban descent. He chairs the Senate Judiciary Subcommittee on Oversight, Federal Rights and Agency Activities, and is the Chairman of the Senate Commerce Subcommittee on Space, Science and Competitiveness. In November 2012, he was appointed Vice-Chairman of the National Republican Senatorial Committee.

Cruz began campaigning for the Republican Presidential nomination in March 2015.[2] During the primary campaign, his base of support was strongest with “women, white evangelical Protestants, people over the age of 50, and those who identified themselves as conservatives”,[3] though he had crossover appeal to other factions within his party, including libertarian conservatives and millennials.[4]

Cruz’s victory in the February 2016 Iowa Caucuses marked the first time a Hispanic person ever won a Presidential caucus or primary. He suspended his campaign for President on May 3, 2016, after losing the Republican primary in Indiana to Donald Trump.

Rafael Edward Cruz was born on December 22, 1970,[5][6] at Foothills General Hospital[7][8] in Calgary, Alberta, Canada, to parents Eleanor Elizabeth (née Darragh) Wilson and Rafael Bienvenido Cruz.[9][10][11][12]Cruz’ mother was born in Wilmington, Delaware. She is of three-quarters Irish and one-quarter Italian descent. She earned an undergraduate degree in mathematics from Rice University in the 1950s.[13] At the time of his birth, Cruz’s parents had lived in Calgary for three years and were working in the oil business as owners of a seismic-data processing firm for oil drilling.[11][14][15][16][17] Cruz has said, “I’m the son of two mathematicians/computer programmers.”[18] In 1974, his father left the family and moved to Texas.[19] Later that year, his parents reconciled and relocated to Houston.[7]

Cruz’ paternal grandfather, Rafael, immigrated to Cuba as an infant with his parents from the Canary Islands of Spain.[20] Cruz’s father, Rafael Cruz, was born in Cuba; he grew up in the middle class and left Cuba in 1957 to attend the University of Texas at Austin. He obtained political asylum in the United States after his four-year student visa expired, as the Cuban Revolution had changed the government.[21] Rafael Cruz earned Canadian citizenship in 1973.[7] Rafael Cruz became a naturalized U.S. citizen in 2005.[11][22][23] Eleanor and Rafael Cruz divorced in 1997.[24]

Cruz attended two private high schools: Faith West Academy in Katy, Texas;[27] and Second Baptist High School in Houston, from which he graduated as valedictorian in 1988.[22][28][29] During high school, Cruz participated in a Houston-based group known at the time as the Free Market Education Foundation, a program that taught high school students the philosophies of economists such as Milton Friedman and Frédéric Bastiat.[17][30]

Cruz graduated cum laude from Princeton University in 1992 with a Bachelor of Arts in Public Policy[31] from the Woodrow Wilson School of Public and International Affairs.[5][32] While at Princeton, he competed for the American Whig-Cliosophic Society‘s Debate Panel and won the top speaker award at both the 1992 U.S. National Debating Championship and the 1992 North American Debating Championship.[33] In 1992, he was named U.S. National Speaker of the Year and, with his debate partner David Panton, also Team of the Year by the American Parliamentary Debate Association.[33] Cruz and Panton later represented Harvard Law School at the 1995 World Debating Championship, losing in the semi-finals to a team from Australia.[34][35][36] Princeton’s debate team named their annual novice championship after Cruz.[36]

Cruz’s senior thesis at Princeton investigated the separation of powers; its title, Clipping the Wings of Angels, draws its inspiration from a passage attributed to US President James Madison: “If angels were to govern men, neither external nor internal controls on government would be necessary.” Cruz argued that the drafters of the Constitution intended to protect the rights of their constituents, and that the last two items in theBill of Rights offer an explicit stop against an all-powerful state.[13][37]

Cruz serves on the Board of Advisors of the Texas Review of Law and Politics.